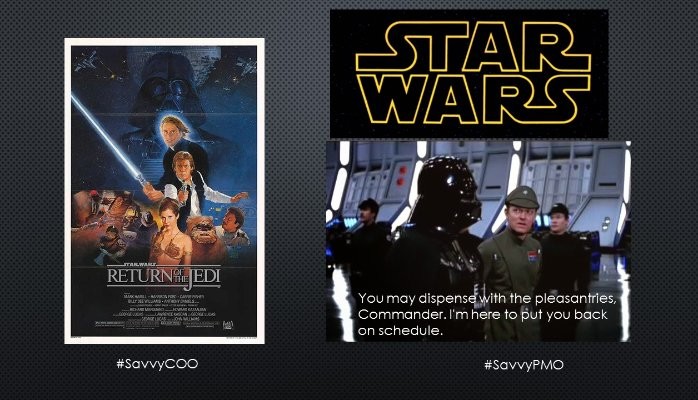 A long time ago, in a galaxy far, far away…a project was behind schedule…

In the opening scene of Return of the Jedi we see a partially completed death star and the arrival of Darth Vader to an honor guard.  The exchange may be all too familiar to all of the project managers out there:

Despite being a master of the dark side of the force, Darth Vader doesn’t display a sophisticated grasp of project management. His answer to recovering the schedule is to simply “motivate” the resources through an implied threat.  He has no idea if lack of motivation is really the root cause of schedule problems or if his motivation techniques will impact the critical path.

For his part, Moff Jerjerrod is a poor project manager.  He has failed to keep his key stakeholders informed, especially his executive sponsor (probably Darth Vader or maybe the Emperor). Moff gives a very poor status update simply saying his resources are working as “hard as they can.” He also gives a week assurance that the schedule will be recovered.  He cites no data to bring confidence to his assurance.  He doesn’t quantify how far behind schedule he is or specify the schedule compression technique he plans to use to recover.

As the conversation continues, we see possible approaches to compress the schedule.  He “needs more men” i.e. additional resources.  When that seems to be ignored,  he then says “We shall double our efforts” which we can assume means approval of overtime of some sort.  From the conversation,  we can assume that Moff must find a way to shorten schedule duration without reducing the project scope.

“Fast tracking-a schedule compression technique in which activities or phases normally done in sequence are performed in parallel for at least a portion of their duration.”

We can see that Moff plans to crash the schedule.  However, crashing works only for tasks on the critical path, otherwise you’re simply throwing in additional resources at random. Moff’s lack of precision in reporting leads me to believe he doesn’t really know his critical path and so his efforts will be ineffective, even with pressure applied by both Darth Vader and the Emperor.

Later,  it seems that the Emperor has directed Moff to also employ Fast Tracking. They want the Death Star to have a fully functional super-laser before all construction is complete and the shields are in place.

Fast tracking often results in rework and increased risk.  The increased risk of not finishing the shields proved to be catastrophic.  The mitigation plan of protecting the death star from the ground (with an SLD-26 planetary shield generator) failed when rebels destroyed the generator.  Without the planetary shield, the rebels were able to destroy the death star. Moff’s project failure was so complete, that he was unable to close out his project, or update his organizational process assets.

Examples from this time and this galaxy

Schedule compression is often the reason Confoe get’s called in to help improve project operations and we are able to help recover lost time.  Your best bet though is to engage with an On Demand Project Management from the beginning so that you don’t fall behind schedule. Our Project Management Information Systems and project expertise keeps your project on schedule and your stakeholders informed.  Fortunately for the Rebel Alliance, Moff Jerjerrod never asked Confoe for help.